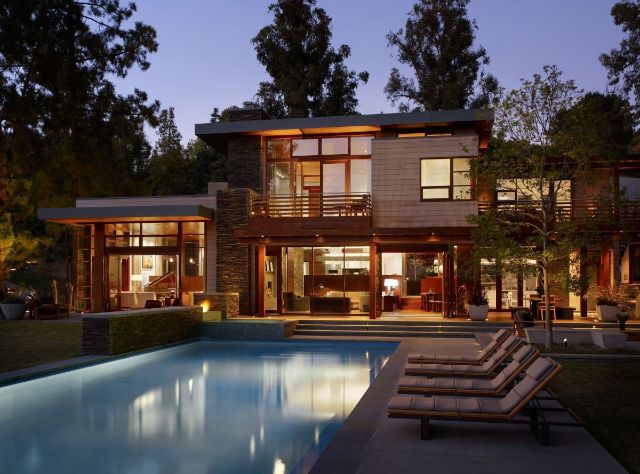 Brentwood feels a world away from Los Angeles. If you close your eyes you would be forgiven for mistaking that you're in Westchester County, or off the Main Line in suburban Philadelphia. However, in reality, you are just west of the 405. The lush vegetation is due in part proximity to the Ocean, but mostly due to irrigation. The neighborhood has always been popular, it simply has becomes more luxurious in the past two decades. While some luxury neighborhoods skew to Spanish Colonials, Brentwood was developed a bit later so there are many more Midcentury Moderns, 1970's Redwood & Glass and 1980's-90's Postmoderns. The neighborhood features two commercial thoroughfares - Wilshire Blvd and Sunset Blvd, with the latter displaying a more small-town Main St feel around Brentwood Village. Sunset Blvd is also a dividing line within the neighborhood, south of which is considered the "Flats of Brentwood" and typically feature larger homes on flat, well-sized lots. However, north of Sunset Blvd, and especially further up in the foothills, you see smaller lots and homes. As a whole, Brentwood is one of the most suburban feeling areas of the city. It has great weather, acclaimed schools, and price-tags to match.
New Developments
Notable Sales
Property Search
Join Our Network
Keep up to date with the latest market trends and opportunities in Los Angeles.
Skip to content